“Impossible to go on, impossible to descend impossible to stay where he is. […] With cheek and ear pressed against the canyonland bedrock he feels, hears, shares the beating of some massive heart, a heavy murmur buried under mountains old as Mesozoic time. His own heart. A heavy thick remote and subterranean thumping sound. The fear”

Over the past year I have been pushing aside and ignoring the subtle yet ever-present and stubborn goal of mine to improve at traditional climbing. My excuses were plentiful; I did not have the time to go out to trad crags to improve, I didn’t have the money to gather up a proper rack, what little trad I have done made me good enough (5.8 leader…) for some basic alpine objectives, and crack climbing hurts. In reality, becoming a competent trad leader is a central and essential skill I knew I would have to learn if I were ever to achieve my larger, long-term and more complex goal of becoming a strong and well-versed rock climbing goddess. (Okay, maybe not a goddess.. but just a half decent all-around climber). I want to be able to ascend a feature using a variety of techniques and skills that could only have been garnered by years of experience on different types of rocks and in different styles. My resumé with sport climbing wasn’t so bad, but was seriously lacking with traditional climbing. The fact of the matter is, trad climbing is the TICKET to the alpine, the ticket to some bigger mountains and objectives, and no truly well-rounded rock climber should lack in the ability to utilize a good hand-jam in a splitter crack. I was scared, though. I was scared to fall on gear, scared to take the leap and hesitant to push my trad grade the way I had my sport grade. As the final month of my trip was approaching, though, I knew I would not be able to call it a success if I didn’t spend a concentrated amount of time exploring and growing in this discipline. So, I got my passport and headed to Canada.

I apologize to any non-climbers who have found this blog, because this is a particularly jargon heavy post.

In total I spent about four weeks in Squamish, BC- one of the premier climbing destinations in Canada with world-class rock climbing involving very convenient approaches. While one can practice all types of climbing in Squamish and its nearby crags, I decided to solely focus on trad climbing. I chose Squamish in particular because  the rock type was granite and I felt that the protection and style would be similar to the Sierra Nevada, where I would be working and living over the summer and where I have some bigger alpine goals and specific routes I’d like to get done.

After three and a half weeks of climbing in Squamish, I was generally pleased with how I progressed. I went from never having fallen on gear to having at least taken a few falls and beginning to tear apart at the idea that I must not fall when trad-climbing. I was able to onsight 11b (though a lot of 10s shut me down, again it goes to show you that grading with trad climbing is extremeley subjective) and fine tune my multi-pitch transitions. Still, I have a long way to go. I am still extremeley humbled every time I even put a rack on my harness. The sheer weight of the pieces is something I am still getting used to. I also realize now that on-sighting a trad line is MUCH harder than on-sighting a sport line because you do not only lack beta on how to execute the moves, but also on the gear. I spent a lot of time locking off for insane amounts of time as I fiddled with gear. I got way more pumped than I would have otherwise, forcing me to tone down the grade. Improvement with gear placement is an arena in which I can make huge gains and which would translate to a faster, more energy-efficient and pleasurable climbing experience.  I am also still terrified half the time I trad climb that my piece will blow. I need to learn to break this mental cycle when it is irrational (aka when I know my pieces are good). This will only come with more practice on the wall and with more falling, which I plan to do this summer.

Finally, I have a long way to go with my technique as well. While I certainly made strides (before I pretty much avoided hand-jams, now I seek them out), I am still really crappy when it comes to “off-sizes”- rattly hands/fists/fingers and offwidth. Again, I can identify the solution to this as just putting myself out there and climbing with more experience folk who can give me a tip or two when it comes to attacking those awkward sizes.

My improvement, thus, has been slight yet noticeable. My flaws and areas I need to work on have been highlighted even futher. I have a long way to go before I’m running up Astroman, but I am eager for the challenge. The fact that climbing takes on so many different forms is one of the reasons I love it so much- when I am bored of one type , I can move onto the other. I can send a 5.13a at Smith Rock and feel like a total boss and then come to Squamish and get schooled by 5.10b. I am always learning.

Before moving on from my trip to Squamish, I must give a shout-out to the local community of climbers there who welcomed me with open arms, gave me tips , cooked with me in parking lots and showed me all of the best areas. I made some friends, there, and hope to climb with them again soon.

Before leaving the area, I managed to make it out to Leavenworth with my friend Judith, who I met in Squamish. We were psyched on trying some of the multipitch trad lines out in the Cascades and Enchantments and I was put in the peculiar position of being the more experience trad/multi-pitch climber out of us. Could I take someone up a multi-pitch trad route? Was I experienced and strong enough? I was certain that I was but was still understandably nervous. Our objective was “Outer Space” the most classic multi-pitch climb in all of Washington that ascends Snow Creek Wall outside of Leavenworth. It is 6 pitches and the crux is 5.9, which was a grade that challenged me a year prior but that now I felt should go down easily. This would be a good test to see how much I had improved, especially since I knew Leavenworth was notoriously more sandbagged (aka graded more stoutly) than Squamish. So, we set out.

Psyched on our successful outing, we were determined to get out again the next day. I was still battling a tough cold, though, and Judith’s knee was bothering her so we decided to go cragging at Index. My car, however, was in major protest to that idea. It began to make some very strange noises that I went and got checked out the next day. Long story short, we ended up spending our second day in Leavenworth trying to find a car part that had broken on my 96 Corolla. Due to the age of my car this was not easy but I got lucky and found a spare part in Seattle. Driving a half-broken car 120 miles on some steep and windy roads was kind of scary, but a very amiable and helpful mechanic in Leavenworth assured me it was okay. We got the part and the next morning I got it installed and then had to start my trip back to California. Shit happens. 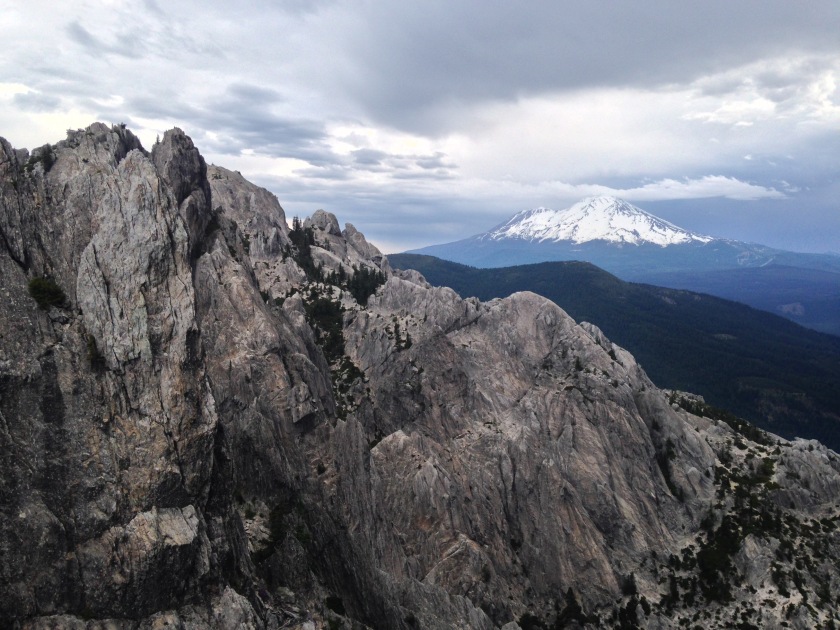 Four days ago I arrived back in the Bay Area and am writing this from the comfort of my parent’s house. I’ve gotten my car washed, re-stocked and am excited to head out tomorrow for Yosemite Valley. On Monday I will start a job in Tuolumne meadows as part of the vegetation management crew. I hope to continue to focus on trad and continue to practice my passion in the place I hold most dear to my heart- the eastern Sierra Nevada. I have some mightily ambitious goals and know that the time I spent practicing trad techniques in the relatively comfortable and safe environment of Squamish will be crucial for me to climb longer routes well in the more rugged and insecure setting of the backcountry.

After four months of traveling by myself and living out of my car, the thirst has not been quenched. I’m more excited about climbing than ever, but my energy has shifted. I’m still a sport climber at heart as it allows for unencumbered and pure movement- which is what draws me to the sport in the first place. Searching for gear on your rack just isn’t in my definition of pure movement. However, I have finally been able to understand what it means to flow well on a crack and to make a hand-jam the best jug in the world. There is some satisfaction to that, as well. I think, though, my excitement for trad climbing comes from the fact that it is an entirely “do it yourself” sort of activity that requires confidence. By engaging with trad climbing I have learned to trust myself. However, I still associated trad climbing with multi-pitch climbing (especially in the states), and this is where my true motivation lies. I want to become proficient at trad so I can ascend beautiful , aesthetic lines high up in the mountains.

Hopefully that is what I will be doing in my off-time in Tuolumne.