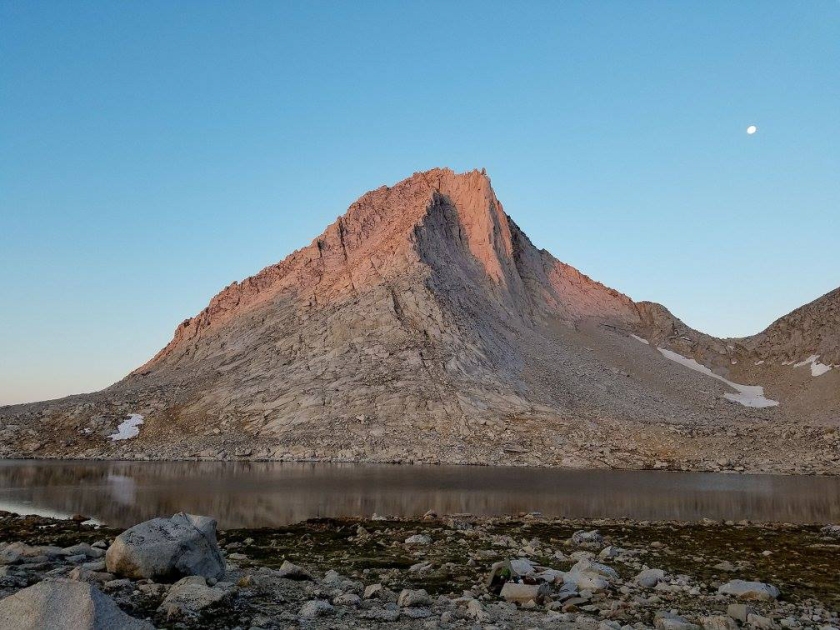 ” Already- although she was standing right there- she began to miss this place, she knew she would miss it for the rest of her days ”
– Elizabeth Gilbert, The Signature of all things

The full moon broke through just in time. Its light pierced through the seemingly impenetrable ceiling of darkness, like a beacon on a lighthouse.  When descending in the dark during a storm, speed is of the utmost importance. Still, I couldn’t help but pause and admire its courage as it shone through the clouds and suddenly illuminated the still waters of a distant lake. A symbol of serenity in an otherwise chaotic situation, my nerves eased.  Hours later, after a demanding, thrilling and downright frightening day on Merriam peak, my partner and I collapsed into our sleeping bags, legs sore but minds content. 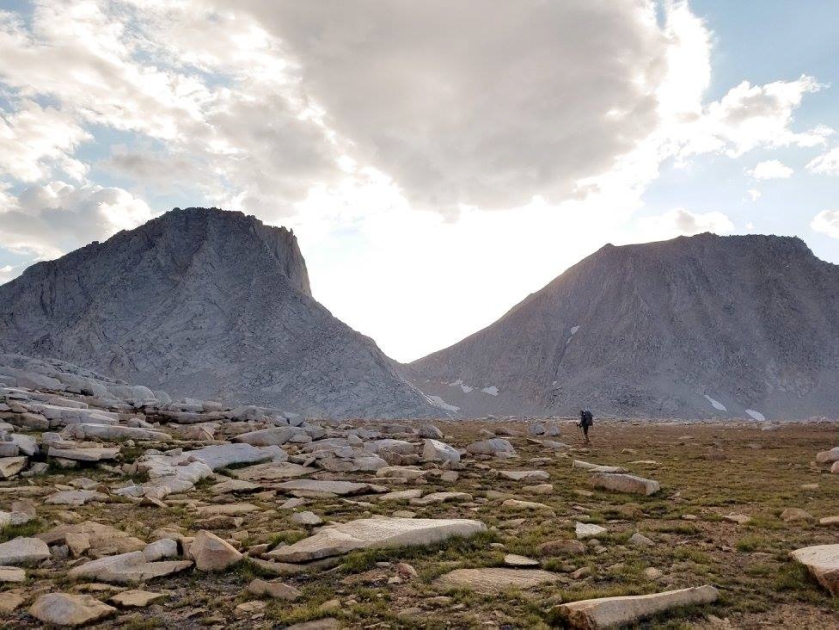 The day before, as we trudged up the Pine Creek trail, I stopped to ask a hiker if he knew what the prominent peak in the distance was. “That’s Bear Creek Spire” he told me. A smile immediately swept my face- “I was on top of that last year!” I exclaimed, remembering that hazy day in 2015 when I climbed the North Arete.

I found myself yet again on top of Bear Creek Spire one month later.  A quick scan in the register and there it was- my name etched in blue ink from my summit of last year. Then, I saw it- that brilliant line of solid rock sweeping up Merriam Peak, where only a few weeks ago I had been an ephemeral part of that ancient feature, winding my way up crack systems and face features.  Further out beyond Merriam I found that small lake, the entire basin now lit up by an unyielding sun. 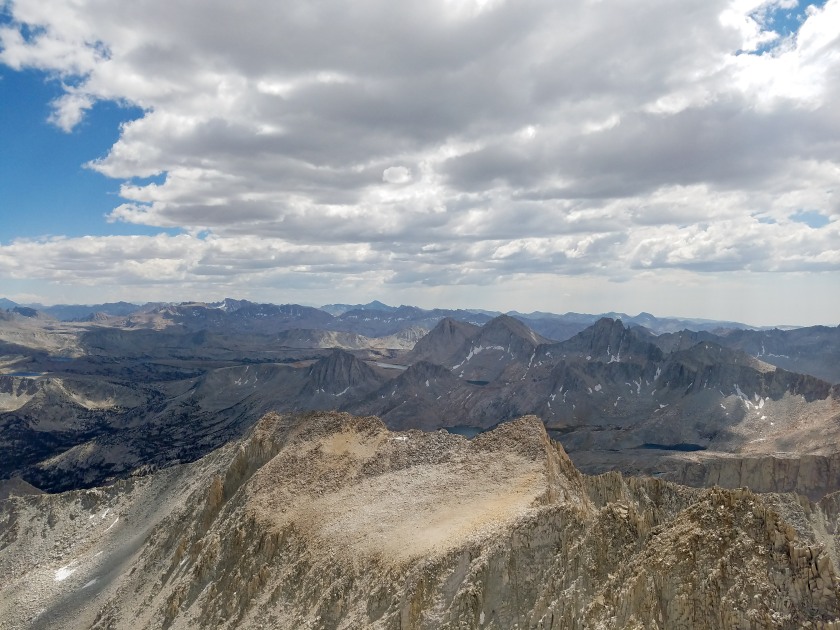 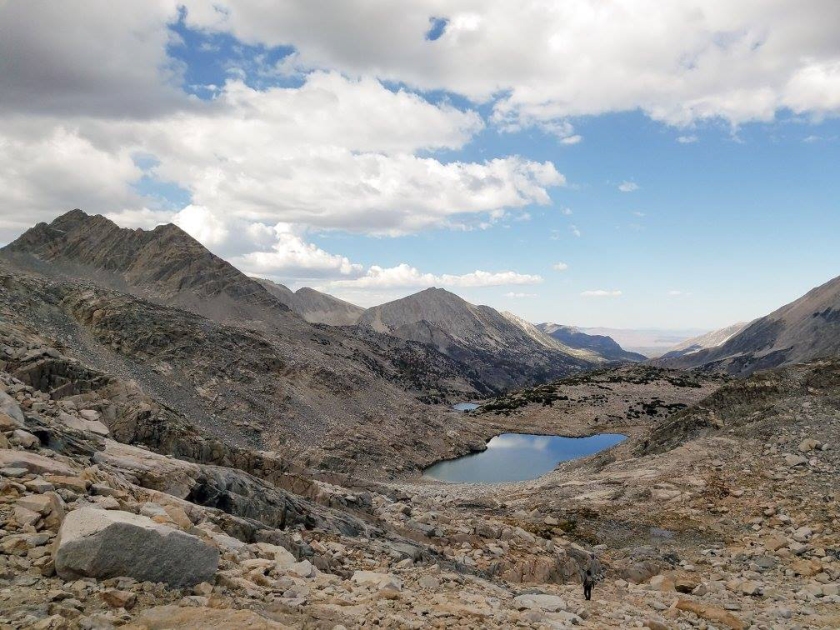 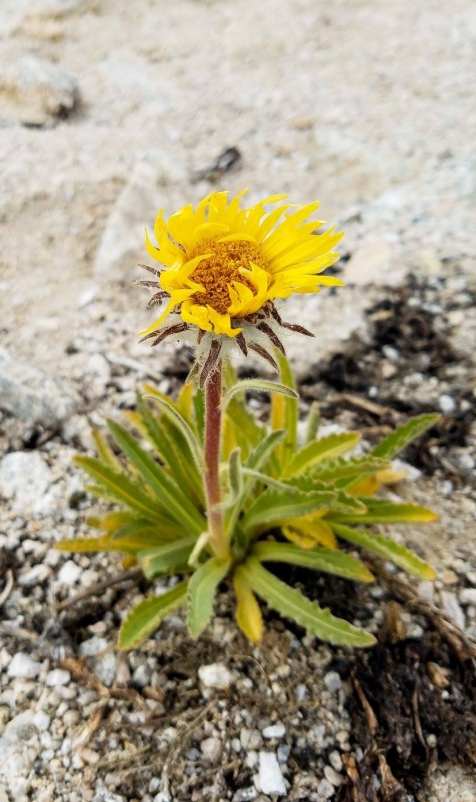 On the Tioga Pass there is a specific turn when- if you glance toward the Dana plateu- you can make out the Third Pillar of Dana as it proudly juts out across the sky, daring you to climb it. The last pitch on that glorious climb was one of the best I’ve ever done. The fear I felt when I pulled those thin moves over a ledge with marginal gear is still so tangible as was the joy I felt when my partner and I summited. The wildflowers that were peppered along the Plateau made it all the more sweet. I’d been wanting to do that route for a long time. 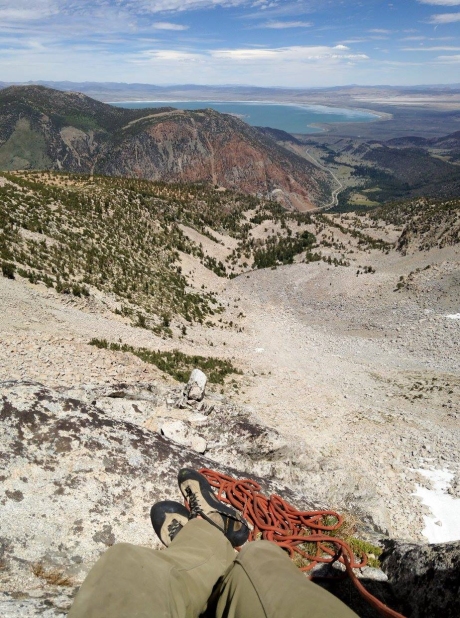 I  can never resist the urge to glance out of the car window when driving through Tuolumne Meadows. Fairview Dome, Phobos cliff, Lamb dome, the corner of OZ, Tenaya peak, Lembert dome, Pywiack all induce vivid images and palpable emotion. How proud I was after leading the corner of OZ. How humbling Lembert turned out to be. How wild traversing “On the Lamb” felt. 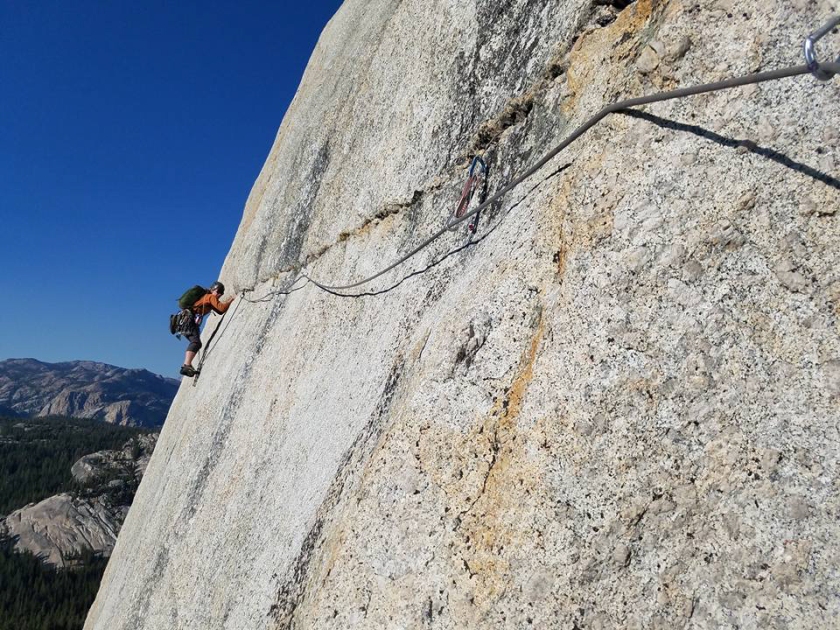 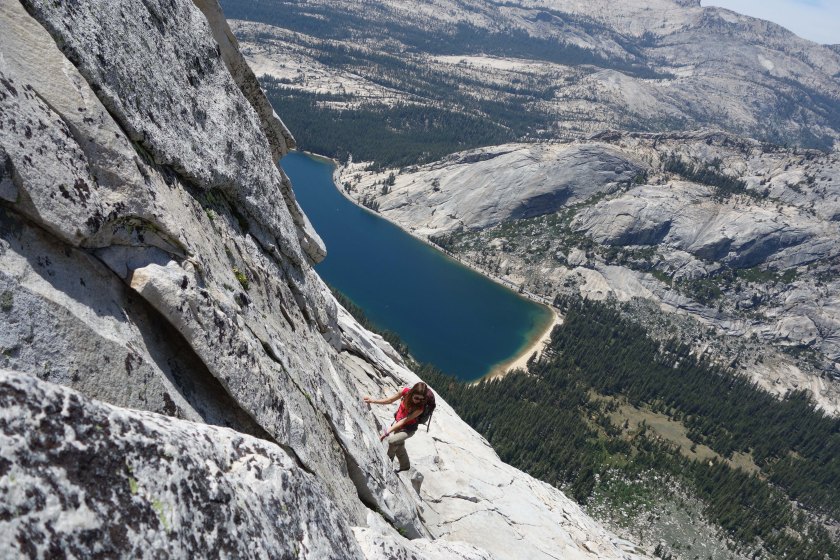 Once I reach Olmstead Point I always admire how Tenaya canyon carves its way toward Yosemite Valley and reminisce about those grand adventures in which you go down, not up. 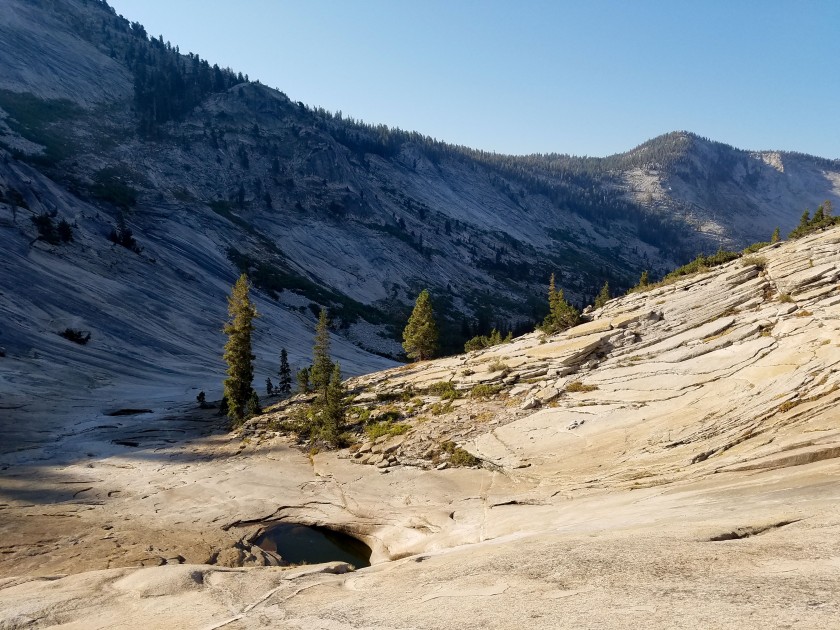 Still, it is the spectacular feature of Mt. Conness that I find the most striking. It greets me as I drive east from the Valley, guarding over the meadows. Walking along its spine- the north ridge- was one of the most frightening experiences I ever had as the 70mph gusts of wind felt like they could rip me off the route.  My longest single day push was spent on the proud southeast face- I felt that offwidth pitch in my shoulders for days afterward. Going back to work the next day, though, I couldn’t help but relate what a great day it had been to anyone willing to listen.

From our work site in July, Mammoth mountain and parts of the Kuna Crest were always visible. When in the middle of September I was standing on that ridge I picked out the prominent Matthes crest, laid out before me in a spectacular vista of granite. The full route was one of the funnest, most enjoyable things I did that summer and I will not hesitate to do it again.

We summited Mammot Mountain on Kuna crest at about 6. It was the middle of September and the sun was setting at around 7.  I fished out my headlamp, not expecting to have needed it. An hour or so later, with a heavy pack, I was in the middle of negotiating a tricky descent when the full moon that greeted me on Merriam suddenly rose.

Like a reliable friend, the moon appeared to join me for epic number 2 of the summer. The situation was serious but manageable, no weather to negotiate, just darkness, thrist and an uncertain path. “Glad to see you” I thought and continued to work my way down. 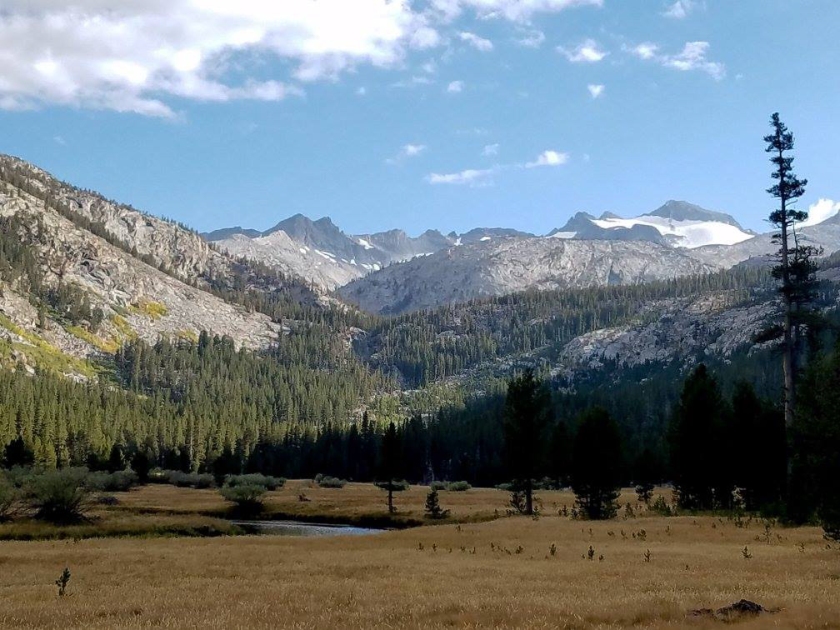 A few days later I was walking down the John Muir trail, going to do a few laps on a boulder problem nearby. There it was, Mammoth Mountain, an ever present fixture in Tuolumne meadows that now suddenly erupted with life for me. It sure feels different once you’ve been up there. Maybe you will epic and you will probably be scared, but you can’t know if you don’t try.

As the days shortened and temperatures began to drop, alpine days have been replaced with cragging. Two weeks ago I found myself in the middle of a 50m pitch in a place I’d been meaning to visit for a long time, Shuteye Ridge. From the the anchors I let out a sigh of relief- slab climbing is never easy on my head- and all anxiety melted away from me as I looked toward  a spectacular view of the Palisade mountain range in the Southern Sierra, lit up by a lazily setting sun. I laugh to myself every time I think about how ridiculous I looked weighed down with all that gear we lugged out some 9 miles in to the base of thunderbolt colouir, with the objective of traversing part of the range. The pink sunset that exploded in the sky that night as we cooked dinner is indelibly etched in my mind. Standing on top of North Palisade- the tallest point I had ever been on- after already having summited two other 14ers in the same day, was exhilarating. 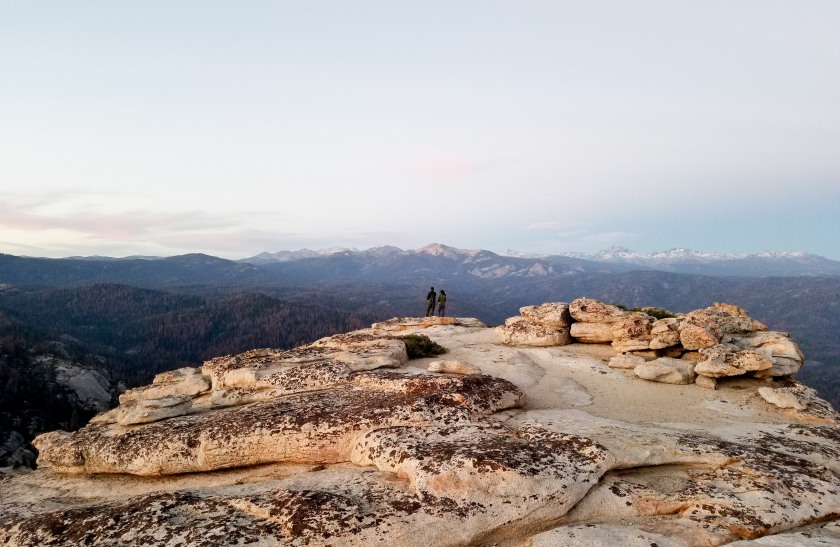 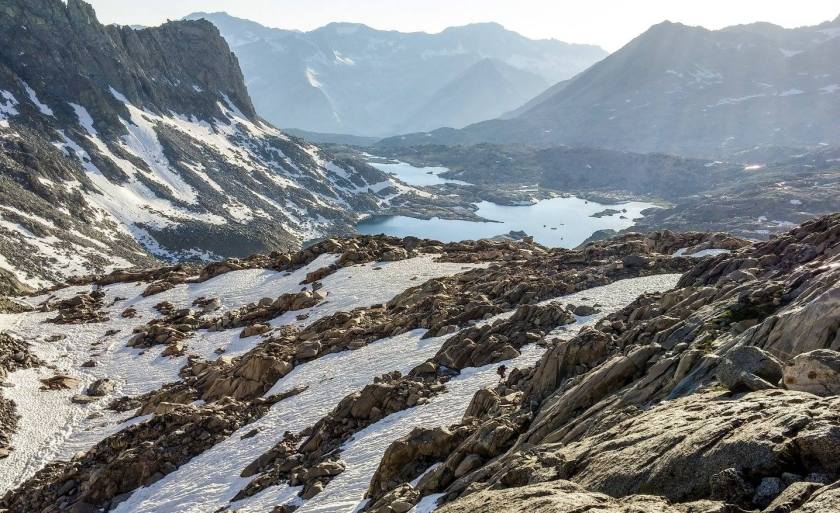 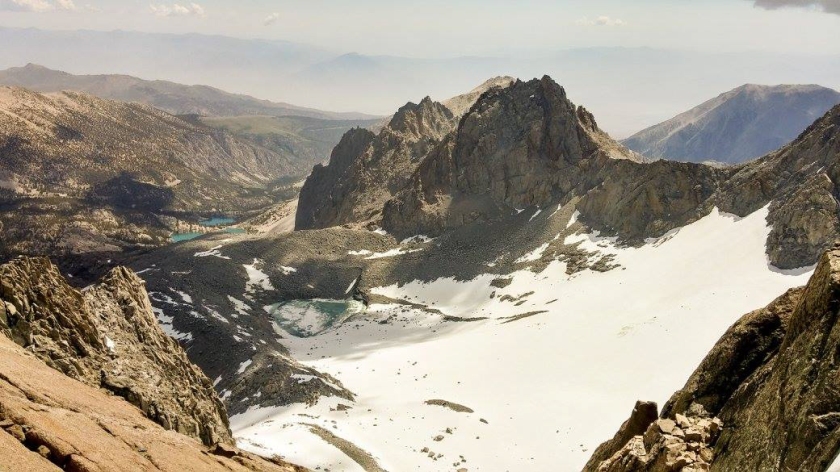 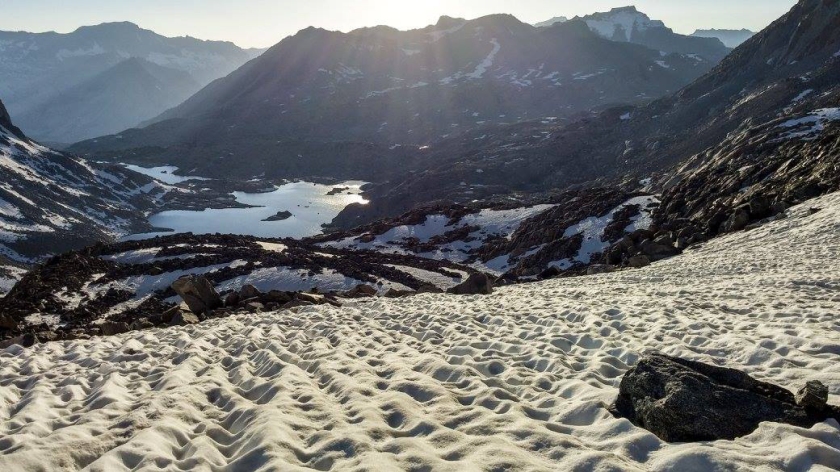 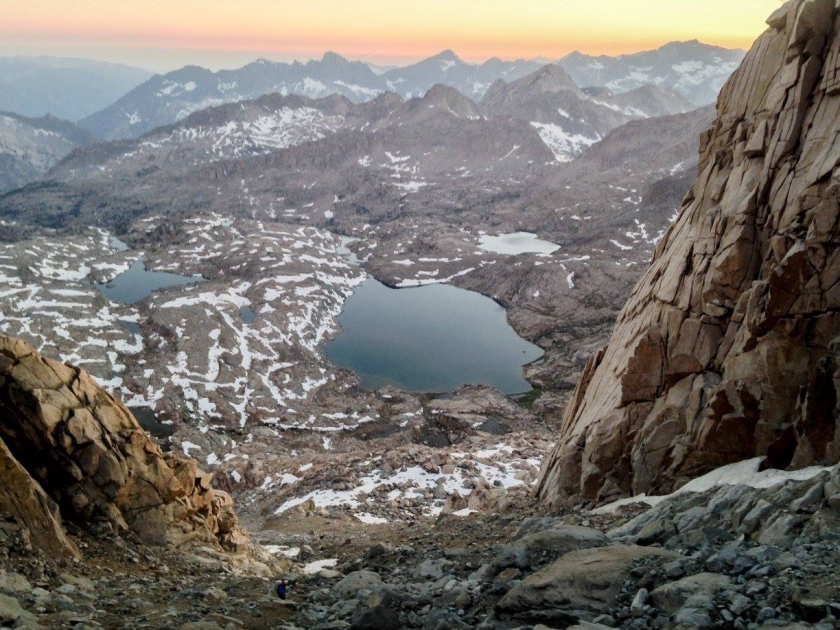 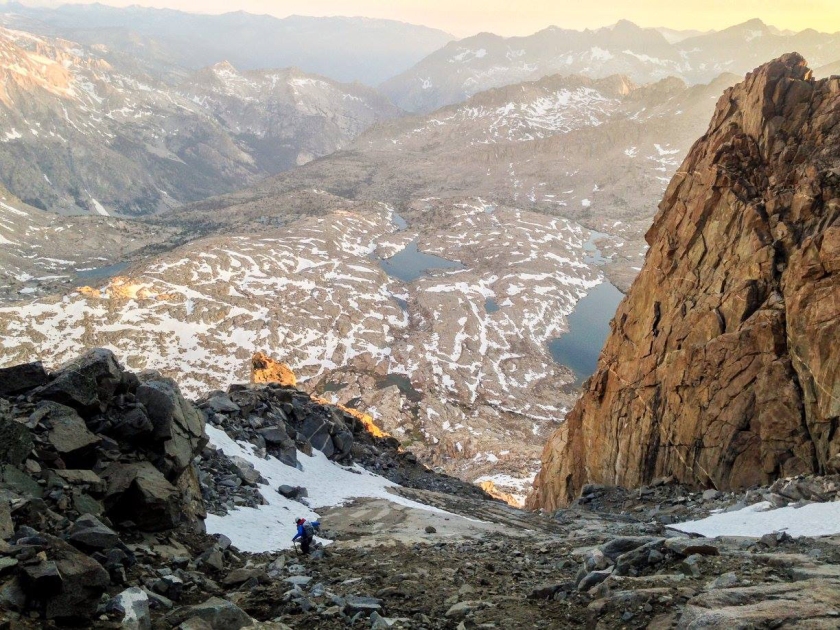 The connection I have created with the landscape around me is something I will carry with me for the rest of my life. These are no longer just features in an endless array of scenic vistas but rather are memories. Memories of challenging myself and growing closer to the people who are standing next to me on the summit, whose names are next to mine in the register, who share food with me and swap stories around a campfire. People who don’t mind- or who simply gracefully tolerate- when I pull out another map or guide and think of another idea for what we could do this weekend. People who laugh with me and calm me down when I’m scared. People whose brake hand never leaves the rope. People that I love.

For all of those features, peaks and ranges that inspire vivid memories, there are countless more that inspire desire and a need to explore. So  much to see, to find and to experience. I am not particularly skilled and the things I do have already been done scores of times  by others. I get very scared and I show it. But, I am motivated, excited and am fueled by an unadulterated passion to get out.

Today I fell off of my project in the Owen’s River Gorge after already having tried it twelve times, the most I’ve ever tried a single route. A sport climber at heart, focusing purely on movement rather than logistics was refreshing. Flowing and connecting graceful yet powerful sequences has always been what drew me to rock climbing in the first place- what hooked me was the focus such a task demands. Every other concern, worry and fear crawl back to the corners of my mind- they’ll make themselves known later but right now I just have to fight to hold on.  Falling- or failing- helps me grow as  a rock-climber and a person as much as my long days in the mountains do.

Yet, as I hiked up and out of the gorge, actually pleased with my progress,  I was met with the formidable Mt. Tom, a fresh dusting of snow on its peak. I saw Pine creek Canyon wind deep into the mountains. Beyond lay Merriam Peak.

To do this stuff is to be alive. I miss it already. 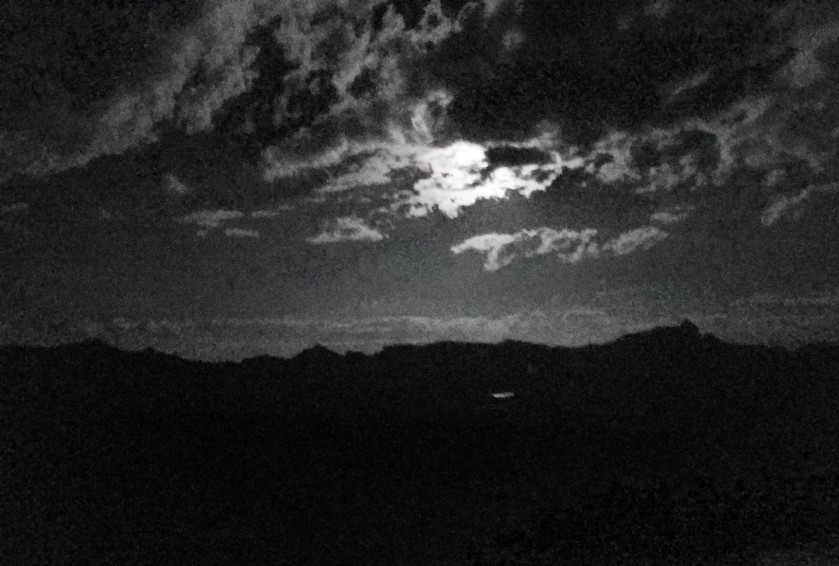 Moving on
Just moving in slow motion
To keep the pain to a minimal
Weightless, only wait for a fall

One thought on “The Alpine”