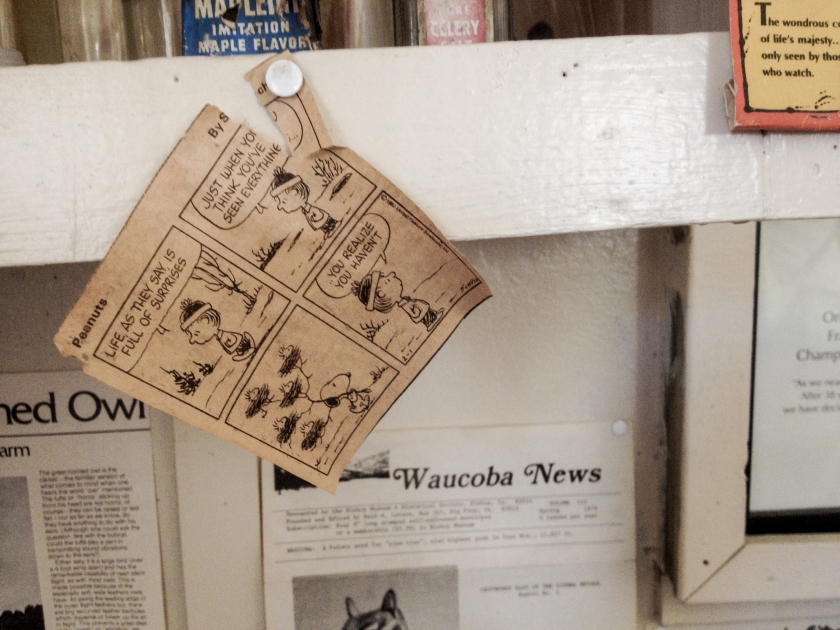 When I first moved to Bishop, the fact that I only had one year to soak up the wonders of the Eastern Sierra almost stressed me out more than it excited me. Seeing as how 90% of the eastern sierra is public lands, one working-year really doesn’t even give one enough time to scratch the surface. So, when my year  quickly shrank to a few weeks when I accepted a job in San Francisco, I hyperventilated a little bit as I realized how little time I had left. Regardless of my brief panic attack (you know life isn’t really that bad when this kind of thing is among your primary concerns) I tried to use my remaining time to the fullest and explore some of the areas I’d wanted to visit, but hadn’t yet been. Bishop sure isn’t going anywhere, but hey-  I am! Here’s a quick anthology of some of my recent explorations in the Owens Valley…
The desert is a landscape that grows on you. I remember the first time I drove through the Mojave desert I found it dull, repetitive and generally not very inspiring. However, living and exploring here has caused me to finally appreciate the uniqueness of deserts and truly find a very peculiar beauty in its vast amount of well- space and remoteness. Whereas high alpine climates or coastal landscapes tend to make us appreciate grandoise and rugged landscapes, at least for me, the desert makes me look more closely at the more subtle details I hadn’t before taken the time to see.. 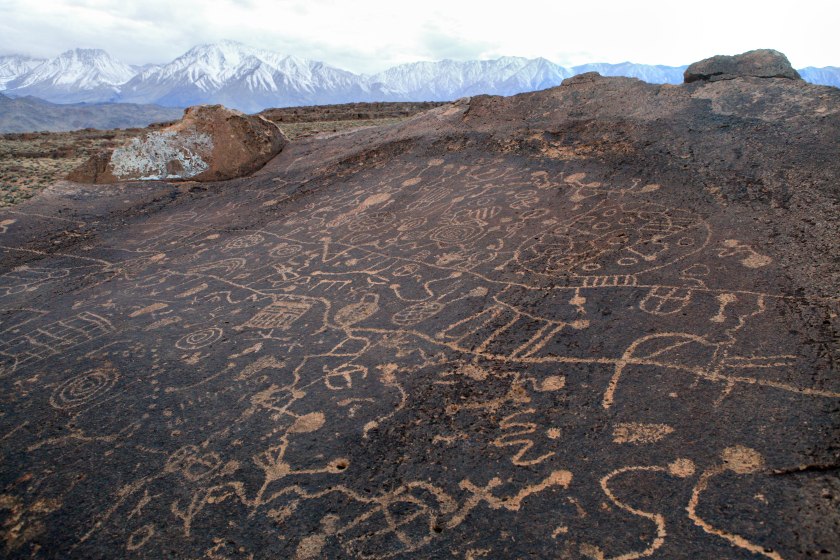 I was lucky enough to be able to go out onto the Volcanic Tablelands, a volcanic landscape that was formed around 750,00  years ago by a single explosion in the Long Valley caldera, northwest of Bishop near Mammoth. The volcanic tablelands is home to a lot of bouldering and is only a 10 minute drive from Bishop. In this sort of “scooped” out landscape created by a single volcanic eruption, one encounters various geological wonders, like nine different “types” of Obsidian. I was also lucky enough to be given an archaelogy tour of the tablelands, where I was trained to open my eyes to the granitic lying around otherwise volcanic rocks, (hence, rocks brought into the area used by prior inhabitants  that often are smoothed out, a sign that they were used for milling), the rock rings that formed the base of ancient structures, smoothed out milling rocks and a whole lot of petroglyphs and pictographs. Once one is taught how to see these things- to pick them out from the seemingly monotonous landscape, the desert begins to speak to you and -as cheesy as it sounds- you really do feel a presence out there, evne if you are absolutely alone.

Sigh. being alone. Solitude. This is Something I will surely miss. My last day in Bishop, I wandered around the Tungsten Hills by myself, exploring and not seeing a single soul the entire day (though definitely saw the 395!) Being soemwhere where this type of solitude can be found only 15 minutes away is a privilege I will surely miss. I did the same thing several times in Fish Slough and along the Tablelands. Good timing, too… because recently I’ve had a lot to think about. 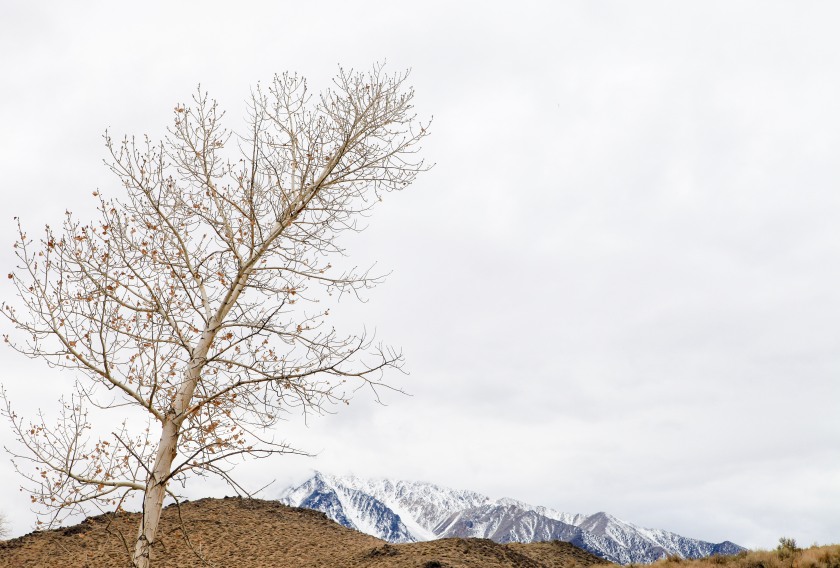 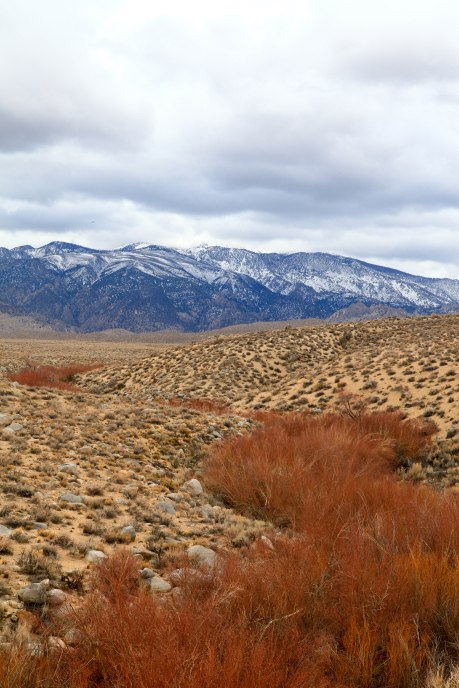 I also hiked to the Champion Spark Plug Mine in the White Mountains with a group of friends. This strenuous hike takes you to the former housing used by the workers of the Spark Plug Mine, which has now been converted into a series of cabins for backpackers to use, as well as a very cool museum containing lots of interesting old documents, a rock collection and various knick knacks (including many old drivers licenses left by hikers..)

Some photos from this museum- 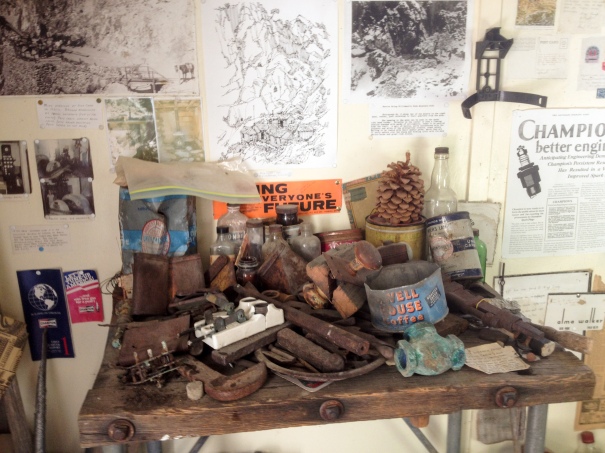 While climbing was certainly on my mind, I did a little bit less of it during my last two weeks in Bishop than one who reads this blog (or knows me) might think. After sending a 12c at the beginning of the month in January, my desire to go to the Gorge waned as I became a much more motivated bouldered. I came to the realization that even for people like me who don’t generally like bouldering, what is here at Bishop is absolutely phenomenal- and phenomenal, world-calss bouldering is really, really fun. I finished up some projects at the Happys and also took the time to explore the Druids, a stupendous bouldering area in a superbly beautiful location that I hadn’t been to before.

There are so many places I still want to go to in the Eastern SIerra. Pine Creek, McGee Creek, Casa Diablo, backpacking all over the Inyo and John Muir woods, lava tubes… when I think of it I am overwhlemed with ideas, visions and goals.

Now that I am again a resident of the West side- it’s time to appreciate this part of California, too- a task which I got off to rather quickly.  I couldn’t help but take advantage of the fact that I have to cruise through Tahoe to get to the Bay Area from Bishop. So, with my car bursting at the seams loaded with all of my crap, I met up with a friend of mine who lives in Mountain View to climb Round Top Mountain in the Mokelumne Wilderness!

Our plan was to snowshoe in the 2.5 miles to Winnemuca lake at the base of Round Top mountain on Saturday evening, climb Round Top on Sunday and snowshoe out the same day so we could both be on our way by 2 or 3 to the Bay. It’s not a very intense day at all, but I had never even worn crampons before and was pretty stressed out from the transition of uprooting myself and moving again, so I was very much down for something different and challenging enough to take my mind off of life for a night.

We got off to a late start (due to the fact that we had to navigate the labyrinth that is Kirkwood Lodge to get Sno-Park passes so we could leave our cars at Carson Pass) and didn’t start our hike until 5:30ish. The fact that I was pretty damn cold in the parking lot made me a little bit nervous about this whole snow-camping experience, but as soon as we started snowshoeing in I warmed up quickly. We were lucky; an almost full moon produced a breathtakingly moon-lit snowscape that made it so we didn’t even need to turn on our headlamps as we snowshoed in with complete darkness.

The next morning I unzipped the tent door to a striking landscape- a frozen lake Winnemucca, snow covered ground and a beautiful dusk hue growing warmer and warmer by the minute as the sun lethargically creeped over the surrounding hills.

While our plan was to climb the 50 degree couloir, we had a little bit of a stove issue which meant that we did not have enough water (could not boil snow nor melt it enough to treat it). I’m a baby when it comes to water and I down it like a fish. (I would definitely be the first one dead in any type of dehydration situation) I also had never worn crampons before nor used an ice-axe and for some reason the steep snow slopes got my nerves going. So, we ended up summiting via the much mellower west-ridge. For me, the experience was certainly still memorable and I was grateful that my partner so graciously abandoned his couloir mission to make sure I was comfortable and had a good first experience. Excellent, first experience- actually..

Unfortunately my very mild dehydration combined with recent stress over personal issues and my mild discomfort (I was kind of cold) made me not a very pleasurable person to summit with. Still, turns out my partner doesn’t hate me, yet..

Now, when I say I was “kind of cold” it’s a euphamism. I was cold, but in reality, I should have been much, much colder. Temperatures at night were maybe around 30 degrees or so and during the day, at the base, were probably hitting the mid 40s. For the end of January, at elevations between 8,000 and 10,000 this is BALMY. Really, we had perfect conditions and I should not have complained at all considering what it should have been like during a normal winter.

Speaking of “winter” it seems California again has skipped winter this year.

In the most recent snow-pack surveys, Sierra snowpack was at around 20% of normal (different sources put it between 12-24 percent). When we summited Round Top and I was looking north, toward the sea that is Lake Tahoe, I tried to imagine the surrounding mountain tops with around 80% more snow. Pretty soon this “winter wonderland” I was in awe of the night before under moonlight was converted in front of my eyes into a bone-dry parched desert.

Wait- wasn’t I supposed to be leaving the desert?