California, climbing, Trad climbing, Uncategorized, Yosemite
2 Comments
Note: This is an old post whose content was created for fun, with little to no proof-reading or editing. Please read this post keeping that in mind.

Driving from the Sierras… to another part in the Sierras… man, life was good. I finished up climbing in Lake Tahoe for five days and was on my way south to Tuolumne Meadows in Yosemite to visit my friend Colleen, who works there, and to climb on some more granite. This time, however, I was going to mix it up a bit. For the past 8 months I’d been basically exclusively sport climbing- climbing up single pitches and pushing myself to new, harder grades. This time I was going to follow up Colleen, a decently experienced trad climber, up some trad multi-pitch climbs whose grades were much less easier than the things I’d been climbing in Spain and in Tahoe, but that were logistically more difficult and involved different techniques. Essentially, to move forward in climbing, sometimes you have to technically move backward. 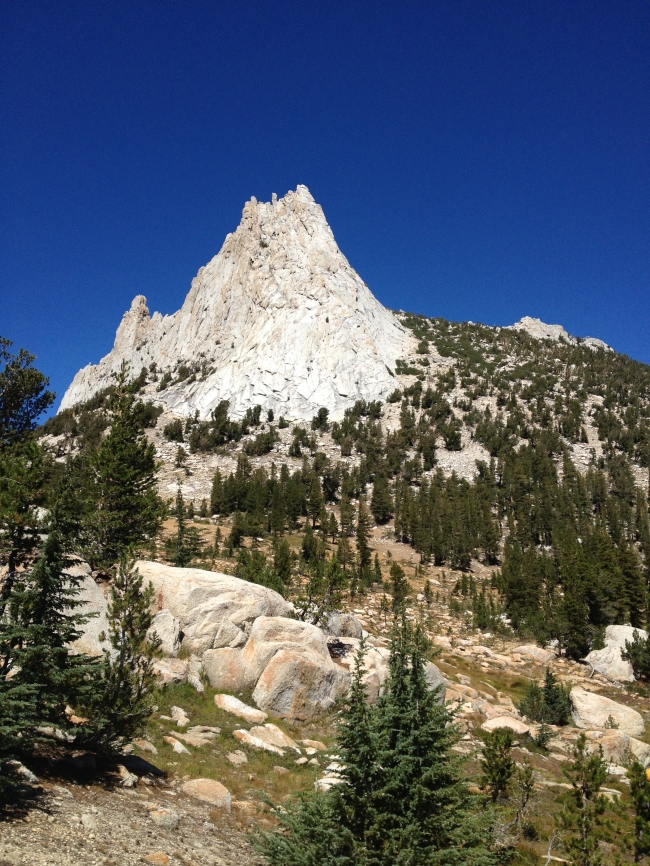 So, here’s the thing about trad climbing.. I suck at it. Well- rather- I have very limited experience climbing trad and climbing multi-pitch climbs. For the folks at home who aren’t as addicted to climbing as I am, here are some quick definitions. Trad-climbing, short for “traditional” climbing, is a type of climbing in which protection is placed inside of cracks or other featured rock. This is distinguished from sport climbing in which a climber simply has to attach a carabiner to a fixed bolt already placed in the rock. Trad-climbing is inherently more risky because placements tend to be more spread out (since they are completely dependent upon the natural features of the rock) and the gear will pop out if it is not placed well; essentially, the safety of the climber and follower is all on the leader (the person who climbs first and places the gear). Bolts are almost always bomber (not always!). Multi-pitch climbing is exactly what it sounds like, a climb that  consists of multiple “pitches” – or sections or rock that you climb up before stopping and making an anchor and starting another pitch (due to constraints in rope length, equipment, convenience etc.)

Since trad climbing is so dependent on the features of the rock, they often (not always) follow crack systems, which accept gear pretty easily. Crack climbing is a very special type of climbing that involves unique techniques that differ wildly from face climbing. Consequently, someone who is a strong sport climber can be a pretty bad trad-climber and vice versa.

I was itching for a change in pace with my climbing and wanted to go on a more mountainous adventure that involved a long hike and a long climb … as well as a summit! This whole time I’d been climbing to the anchor of sport climbs which usually don’t actually summit anything, they just stop when the features of the rock for that pitch stop. I wanted a hike. I wanted a vista. I wanted a different experience. I wanted to get tired.

The drive was nice, I drove along the eastern edge of Lake Tahoe (which, by the way.. is the biggest alpine lake in North America ) and saw Mono Lake. It also was a bit stormy which was worrying me since you don’t really want to do any type of long climbing in the Sierras if there is even a slight chance that a mega storm will roll through.

The next morning Colleen and I decided to just do a day-hike to the North Dome because there was still a chance of rain and the sky was pretty cloudy. It was nice hike that ended with a remarkable view of Half-Dome. Half Dome really is quite an inspiring hunk of granite and I could feel my motivation growing for some multi-pitch climbing just by looking at that thing- maybe someday I will climb it, who knows.

Our plan was that we would wake up at 5 AM and backpack out to do Matthes Crest, a mile long traverse we were planning to simul-climb. Then we would sleep by Echo Lakes and the next day climb Cathedral Peak, a 700 foot peak that is a Tuolumne classic. So, we woke up and started on the trail.

While we were hiking we changed plans due to our scant knowledge of how to actually do Matthes Crest (the beta in the supertopo guide kind of sucks, just saying) and we passed a guy who made it sound like we wouldn’t be able to get it done. So we decided to do Cathedral first to have more time on Matthes the next day.

When we got there, the base was already crowded. This is one of the most famous easy-moderate climbs in Tuolumne so we expected to have to share the face with other parties but geez at one point there had to have been 20 parties on the wall! Colleen lead up all the pitches like a boss and I followed.

Around pitch 3 or 4 it got very windy and I got very cold. I started to shiver and that pretty much makes anything you are doing pretty miserable, even if you are climbing an amazing piece of rock. Thankfully it got warmer and less windy and we summited in six pitches. The whole time we had some beautiful yet harrowing views of the smoke that the Rim Fire-which started around 10 miles west of Yosemite and is still only 35% contained- was sending up into the sky.

Colleen and I at the summit

On our way down we had a nice view of Eichorn’s pinnacle, another climb that is right next to Cathedral and that people often link with Cathedral. 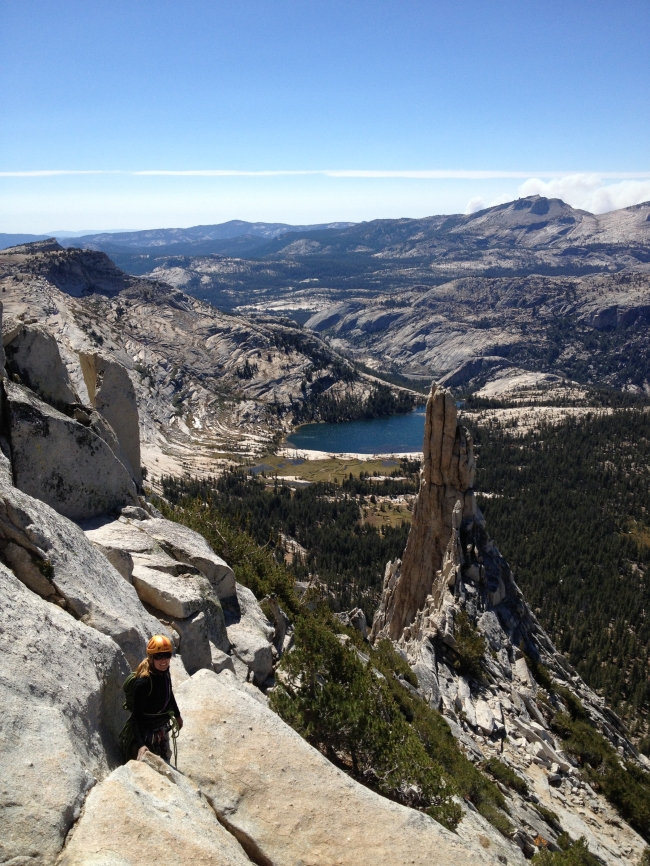 Colleen in front of Eichorn’s pinnacle

So, we hiked down and went back to get our backpacks that we had stashed in a tree so marmots wouldn’t get to them. Then Colleen led the way cross-country to Echo lakes, where we were planning to set up camp. After walking for around 1.5 miles we got an incredible view of the lake. 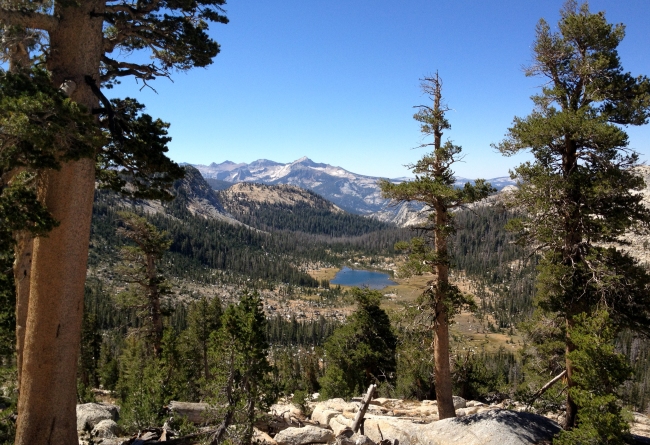 View of Echo lakes before we hiked down to set up camp near it.

So at this point, I was exhausted. I don’t know if it was the elevation (we were at around 2,800 meters) or if it was the fact that I hadn’t worn such a heavy pack in a long time, but by the time we made it to camp I was so, so tired. Colleen seemed to have unlimited energy, even though she had just come back from a different backpacking trip for work. Basically, she’s a boss. Anyways, I was pretty surprised at how quickly my energy was depleted because I had this impression that I was at least in decent shape… oh how you are humbled by doing different things. Along the way we passed by Matthes Crest, what we had originally planned to climb the next day. Though, as my energy levels plummeted my motivation for climbing the thing waned. 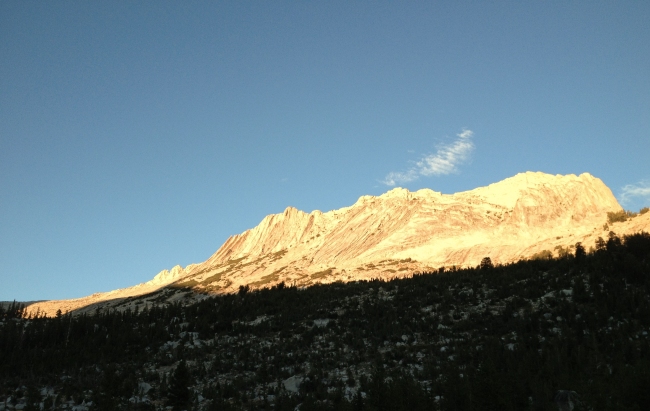 Matthes Crest in the morning light. via iphone.

In fact, I think I broke Colleen’s heart a little bit when I told her that I didn’t think I could handle waking up at 5 AM, simul climbing this thing, hiking out again, and then driving 6 hours back to San José (I had to leave the next day). Though I probably could have done it, the fact of the matter was I just didn’t want to. I was tired. I didn’t like that I was tired, I didn’t like that I was bailing so easily but I didn’t want to lie to myself and force myself up something I didn’t want to do. It probably would have been one of those amazing experiences that is totally worth the pain once you’re done with it, but I just didn’t want to do it. This sport-climber was already pooped. Colleen was bummed but gracious so we slept in and hiked out the next morning, painfully close to Matthes Crest.

evening view of Echo Lake from our campsite

I took forever on the hike back, Colleen had to wait for me several times and this was a short hike (maybe 5-6 miles), shorter than distances that I run regularly. Just goes to show you what elevation and a large pack can do to you! We got back and I very happily threw my pack off and got a salmon burger at the Tuolumne Grill. And then a vegan cookie. Nom. I Loaded up the car and started home. The 120 was closed due to the fire so I had to take an alterante path using the 41 and 152 through Gilroy that basically took me through the middle of nowhere for a bit. Though I did take a mini-detour through Yosemite Valley just to enjoy the views.. 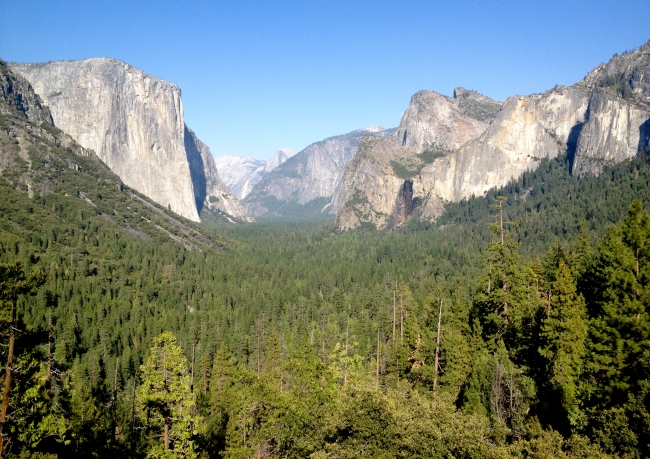 Ah, the most famous and one of the most breathtaking views of Yosemite! On the left you have El Capitan and you can see Half Dome tucked in the background. Usually there are waterfalls  (one on the right hand side , where you see that dark, wet rock) but they only flow in the spring, I believe

After a 5-6 hour drive home I ate some food and went to bed. Now I start my 3 week stint of NOT traveling for once in the past year. I’ll be switching roles, dog-sitting my favorite creature in the world (my dog, Scottie) for my parents while they go to Europe. So far it’s been a very nice change of pace. I’m still training for climbing, running and hiking but I am staying in the same place every night- the house I grew up in. Once they come back September 12th though I’ll be running around the state again until university starts on September 26th! Until then, time to chill for a bit… or get woken up by Scottie at 630 AM every morning for a walk.. that’s relaxing, right?

Scottie, defining the art of “chilling”.. when he’s not running around and being the most hyper 12 year old dog ever